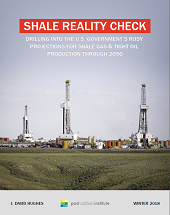 « Shale gas and tight oil from low permeability reservoirs have provided a new lease on life for U.S. oil and gas production. Tight oil has allowed U.S. oil production to double from its 2005 lows, and shale gas has similarly allowed a major increase in U.S. gas production. However, the nature of these reservoirs is that they decline quickly, such that production from individual wells falls 70–90% in the first three years, and field declines without new drilling typically range 20–40% per year. Continual investment in new drilling is therefore required to avoid steep production declines. Older fields like the Barnett, where drilling has nearly ceased, are in terminal decline.

How sustainable is shale production in the long term given optimistic government and industry forecasts of robust production through 2050 and beyond? This report endeavors to answer that question by assessing the viability of the projections of the U.S. Energy Information Administration (EIA), which are widely used by policymakers, industry, and investors to make long-term plans. »